The authorities consult the producers regarding the Xylella fastidiosa emergency.

DG SANTE is the General Direction of the European Commission that determines, among various activities, the phytosanitary measures of surveillance and eradication of the terrible quarantine bacterium.

Specifically, in Brindisi, the Authorities organised a meeting with stakeholders to discuss about the emergency measures and, on this occasion, there were the highest technical experts: Dorothée André, Harry Arijs and Pasquale di Rubbo of DG SANTE, Bruno Faraglia and Carlo Cesaroni of the Servizio Fitosanitario Centrale (Central Phytosanitary Service), Gianluca Nardone, Giuseppe Tedeschi and Anna Percoco of the Dipartimento Agricoltura, Sviluppo Rurale ed Ambientale (Department of Agriculture, Rural Development and Environmental Affairs) of Puglia Region. 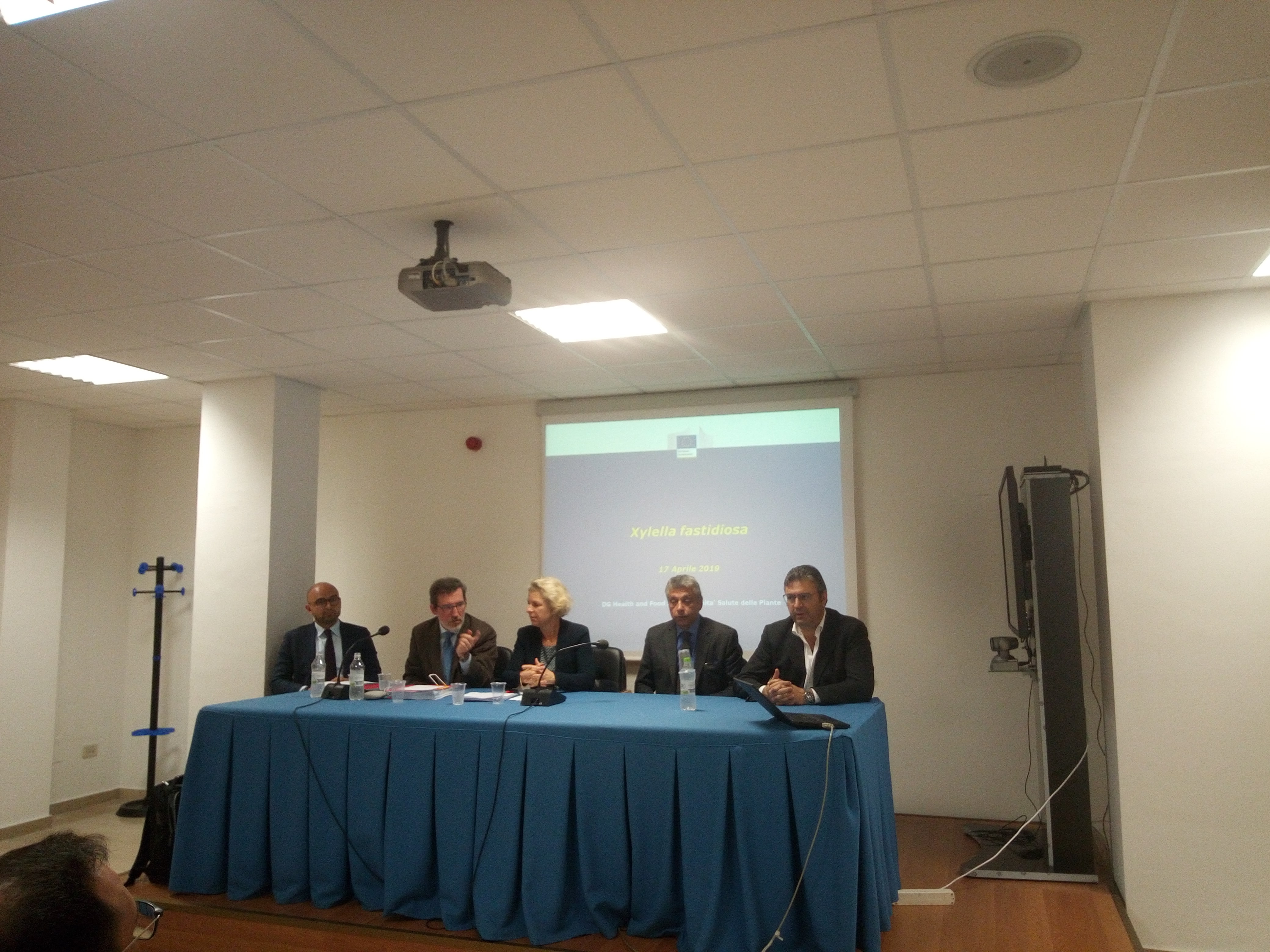 Dr. Faraglia started the meeting describing the positive institutional activities and the synergy between MIPAAFT (Ministry of Agricultural, Food, Forestry, and Tourism Policies) and Puglia Region communicating also that the meeting is necessary to listen to suggestions for the next implementation of the 2015/789 Commission Implementing Decision.

Dr. André continued confirming the commitment of Vytenis Andriukaitis, European Commissioner for Health and Food Safety, who is constantly in contact with the Minister of Agricultural Policies Gian Marco Centinaio to continue the fight against the pathogen; furthermore, the European Commission allocated funds for the eradications and indemnities (on condition that the quarantine measures are applied) and also, for the first time on quarantine organisms, it allocated ten million euro for the two international research projects PONTE and XF ACTORS in which ANVE participates as stakeholder.

Very interesting was the intervention by Dr. Di Rubbo that described the situation of the other outbreaks in the European Union with the presence of the subspecies pauca, fastidiosa and multiplex. Di Rubbo also communicated that in May the new scientific evaluation by EFSA (European Food Safety Authority) will be published; the European official continued presenting the surveillance data specifying that in the European Union, except for the delimited zones, 120,000 inspections and 70,000 samplings were carried out, while only in the delimited zone of Puglia 127,000 inspections and 89,000 samplings were carried out confirming the intense monitoring activity and the capillary action of the interventions of the Phytosanitary Service.

During the meeting there were the interventions of the stakeholders, among which President Capitanio who expressed disappointment for the blocking of the handling that sees the impossibility of selling the specified plants produced in the delimited zone even within the same zone; Capitanio has therefore proposed adopting said measures only for the specified plants of the subspecies pauca and not to all those listed in Annex 1 of the Implementing Decision 2015/789 (over 300 plants). In fact, after five years of scientific research it can be confirmed that in the Puglia area there is only the subspecies pauca and moreover it can be determined which , among the plants specified, are the sensitive ones; such solution would be very helpful for the companies that fall within the delimited zone since they could at least restart part of their production and marketing.

Councillor Buemi continued discussing about the modifications of the standard and asked to differentiate the inaccessible measures of Art. 9 (that identify the derogation modalities to produce in the delimited zone) identifying new criteria at least in the buffer zone that, for definition, is untouched. In addition, he asked to define the zones according to the actual distribution of the outbreaks and not linearly from east to west of the Puglia peninsula since this system further worsens the situation of the nurseries that often are located forty kilometres from the infection.

The Authorities present have noted down the suggestions communicating their availability to assess them.

Dr. Faraglia and Dr. Nardone then closed the meeting communicating that also DG AGRI is involved in raising funds for the infected zones and that in a short time all the requests that arrived for the identification of the right coherence with the standard and future implementations will be evaluated. The technical group then transferred to Monte Argentario in Tuscany where it verified the progress of the eradication and assessed the next measures to be adopted.

President Capitanio commented: “the opening that the European Commission is demonstrating involving the companies is highly positive. However, we are aware that all that we have asked for Puglia Region will be evaluated only if the Region adopts the measures, including the eradication of the plants, but we also know that to date there are dozens of sick plants in the containment zone. Intervention immediacy is necessary otherwise we just took the umpteenth outing to Brindisi.”